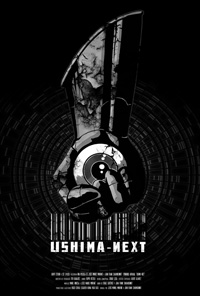 My job in this movie was to do the visual effects. Much of the film takes place in virtual stages. It was filmed using the chroma key technique for later editing.

The feature film Ushima-Next has been created in 2009 by actor and director Joan Frank Charansonnet. It has the support and collaboration of Fernando Arrabal. It has been co-directed by Joan Frank Charansonnet himself and Jesús Manuel Montané. The script is co-signed by Charansonnet and Israel Gutierrez and is a co-production by Set d’acció (Roger Cortal and Yago Isasi) and Grupo Estudio. Among the more than 40 actors who have collaborated in Ushima-Next, the actors Jordi Sibón, Carolina Rodés, Eva Perea and Dani Amor who co-star in the film stand out.

The premiere was on October 15, 2011, at 15:30. Entering the Noves Visions – Specials category of the International Fantastic Film Festival of Sitges .

In an alternative reality, created and managed by computers and very similar to the current world, everyone is happy… except four people, who decide to change their lives and be free.

Ushima-Next poses a critical reflection on the hyper-consumer and hyper-informed society. It takes over from the panic film that, in the 70s, created Fernando Arrabal, Alejandro Jodorowsky and Roland Topor. According to Arrabal, it is “the first post-panic genre movie”.