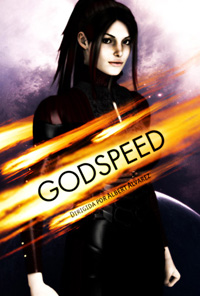 Short film created in 2006. Artistic and personal. I took care of the script, direction, animation, soundtrack, visual effects, editing and final editing.
The duration of the work is 20 min. It was projected in the informative sessions of the International Festival Zinebi 48 and 49.

After picking up Kira (a beautiful girl who suffers from amnesia), the ship of Eric and Harry is absorbed by a wormhole and expelled to a new universe where an uncertain future awaits them.

Everything started with the idea that manifested in my head. So, I put on the literary script and I realized that it was impossible that I could raise the project in real image. So with my previous knowledge I launched for the animated production. After eight long months of hard solo work, I finished it and sent it to several festivals. Later a Catalan producer bought the rights to recreate a renewed version for television called Godspeed: One Secret Legacy in which I collaborated and worked as an animator, editor and composer.

Richard del Olmo , which puts The voice of Radek in the short film, is a professional voice actor who has put his voice in many movies, TV series and games. He lent his voice selflessly when he saw several previous trailers that showed the final finish of the project.

WHERE CAN I SEE IT?:

The short film is in the re-edition phase to incorporate certain improvements in its finishing and at the moment it is not accessible.