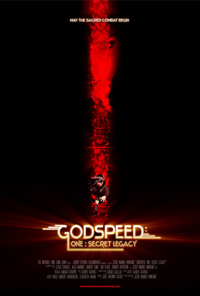 This animated feature was a completely new adaptation of my first short film Godspeed. I worked as an animator, editor and composer of the soundtrack.

The film was written and directed by Jesús Manuel Montané and co-produced by The Invisible Zing Zang Zoom and Televisió de Catalunya.

The universe is at war… Garud’Zbel, leader of the El’Thanat and carrier of darkness, launches his final attack on L’Voh’Dan, the home planet of the El’Djinn. Somewhere in that condemned world, a man tries to save his daughter, Kira, and protects her in a security bunker. But all efforts are useless. The powerful El’Thanat weapons reach the underground shelters. The radiation transforms Kira into a being of great power, capable of confronting Garud’Zbel and bringing peace, once again, to the cosmos.

WHERE CAN I SEE IT?

The film is waiting to be broadcast someday on television.